It is 15th September, I hook up pedals and go.  I’m  in London today, all the roads are reserved for cyclists and I can hear the public clamour along the routes.  I ride through Lower Thames Street and find myself in front of the Tower of London, and I get to the Tower Bridge, fascinating in its majesty. 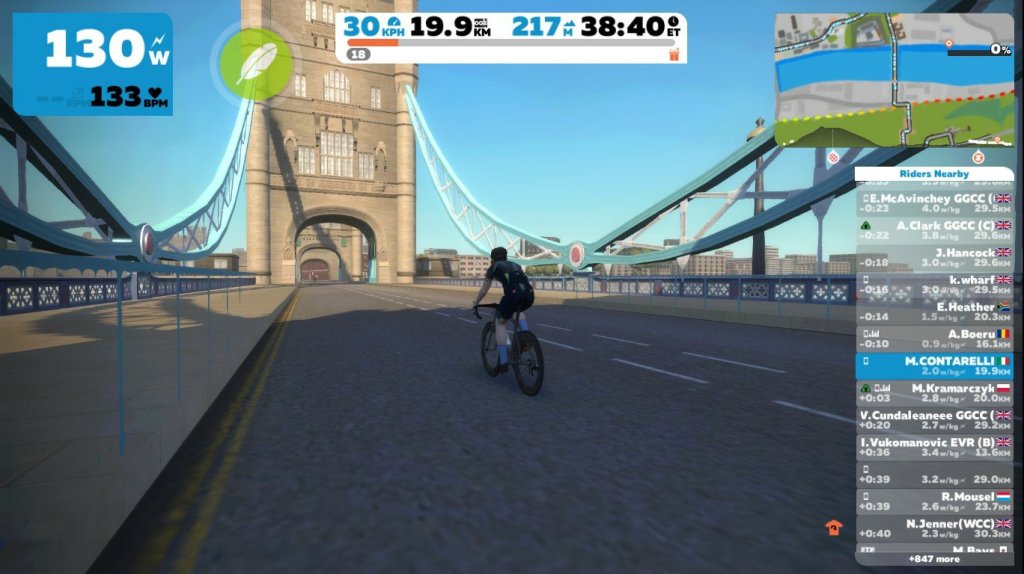 On the other shore of the river the route descends in the subway, riding on a special track made of wooden planks, arranged just to allow the passage of the bikes. At the next station I leave the tube. 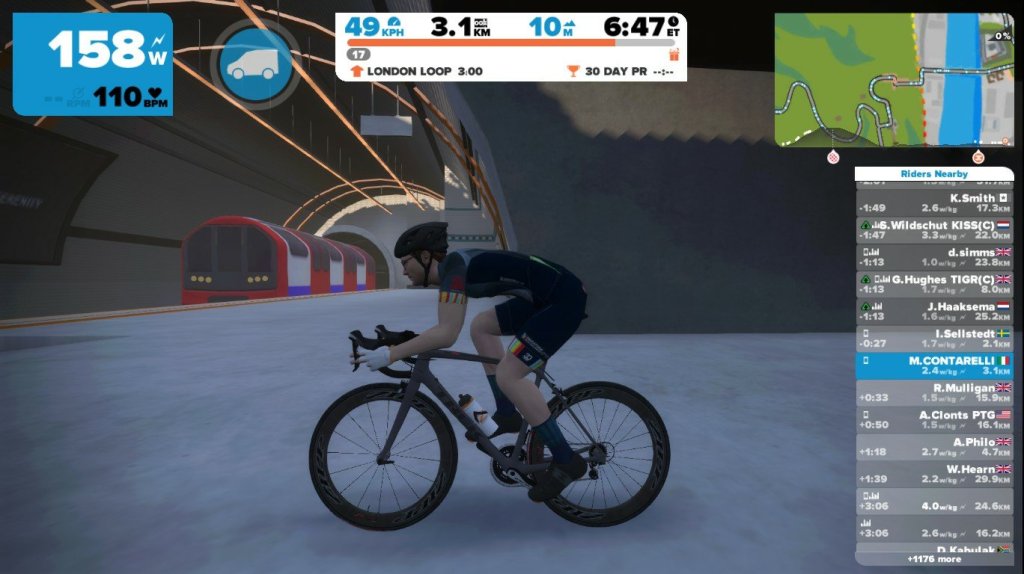 Amazingly, now I’m on a green English hill, with a lovely background music of twitters of the birds. The climb is not very long, only three kilometers, and rather varied; some segments with slopes of 8-10% and other of 4-5%. After very first meters I have already choose to go up at maximum rate, it will be a good workout to increase vo2max! 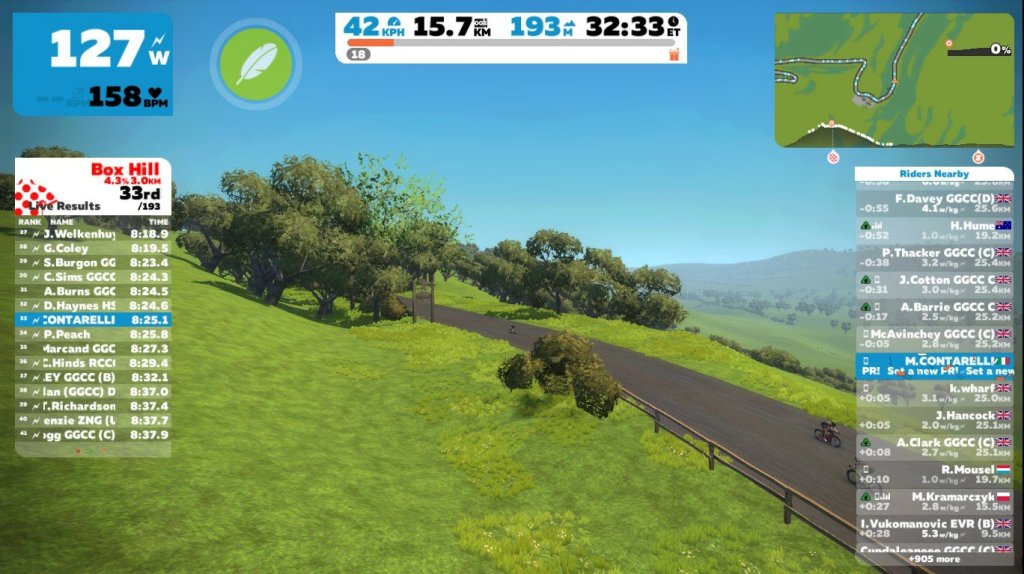 On the top, I have the best time between those who are on the Fox Hill climb (to be honest only 30 people) and now I wear the polka-dotted jersey of climbs leader. 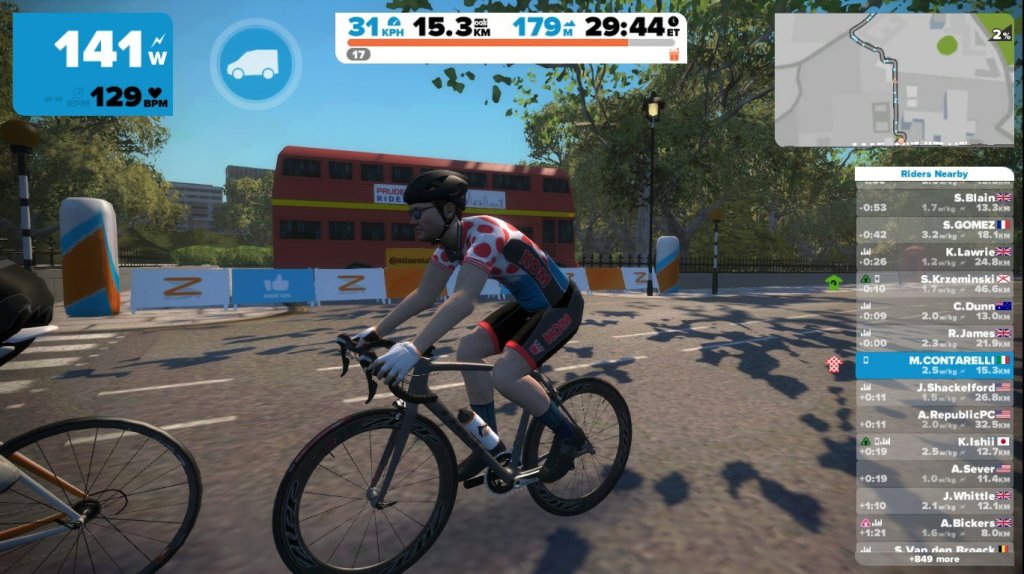 Begin the descent, I reach speed crazy for me. Once again by subway, I head to the next station and I climb the stairs with sloping over 15%. As in a spell, I’m end up again at Westminster Bridge; as if subway were a kind of teleportation. 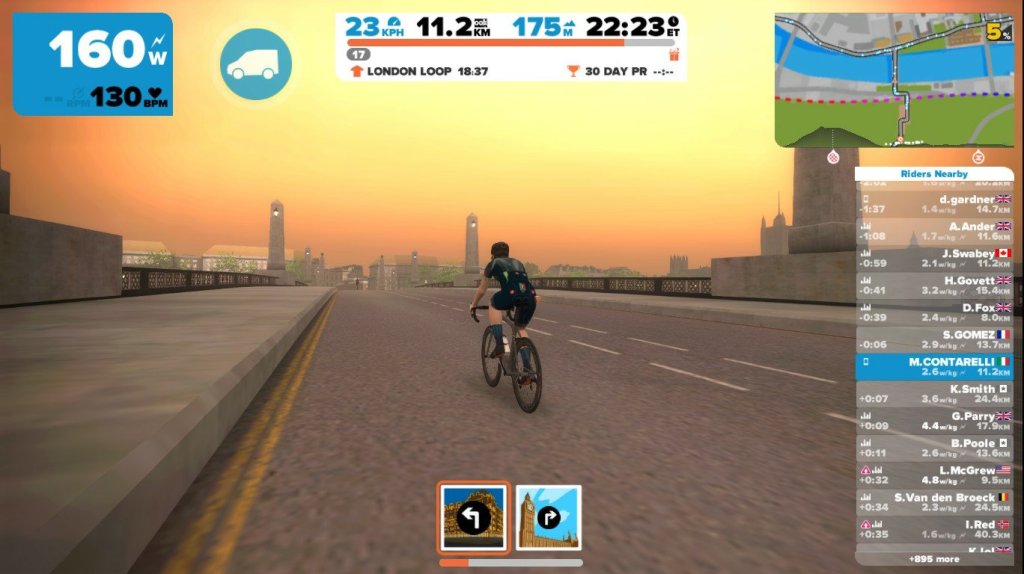 After the bridge, I turn left in  Abingdon Street; in distance I can see four chimneys, those of the Battersea Power Station, the old coal-fired power plant now home to Apple UK. Above them a large inflatable, it is a pink pig, a tribute to the song ‘Pigs on the wing’ by Pink Floyd (my favorite rock band). I instantly dive into my teenage past when I listened their music, in Sennhizer headphones, all afternoon. 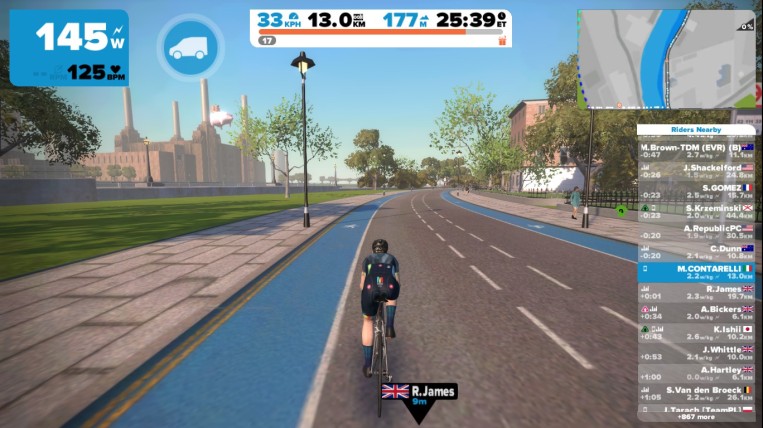 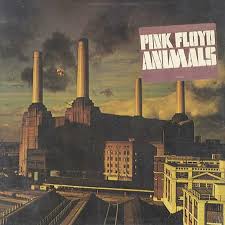 The buzz of passersby brings me to today, I turn right in Chelsea Bridge Road proud of my polka-dotted jersey more more beautiful under the sun. 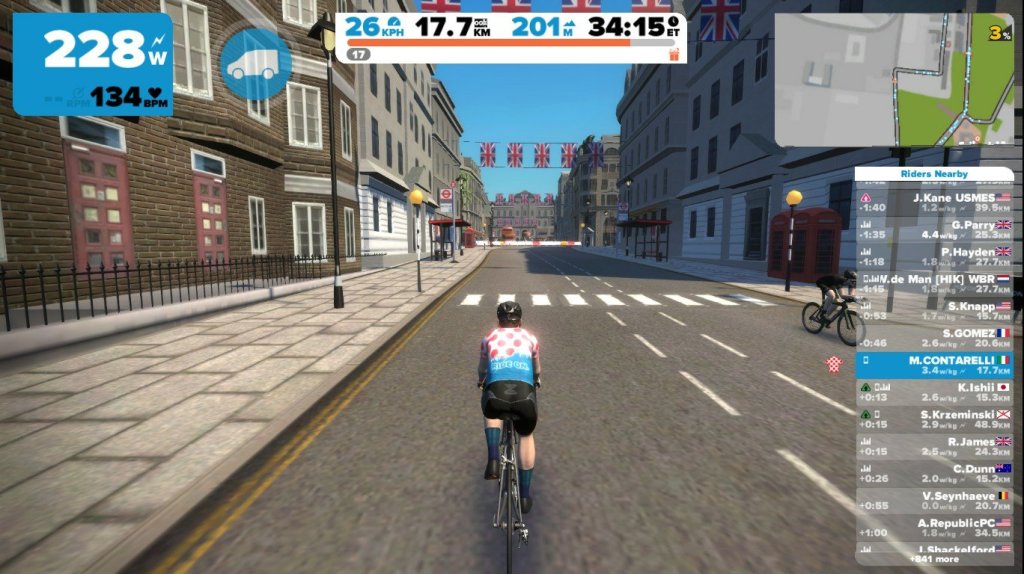 I run along Hide Park and Buckingham Palace and within the famous Trafalgar Square. What a excitement: here dozens of cyclists cross each other from the various paths.  I go in Lower Thames Street street and arrive to the finish line. I release the pedals and I get off from my bike. But I’m confused, looking around me, I’m not in London, I never came out of my room. 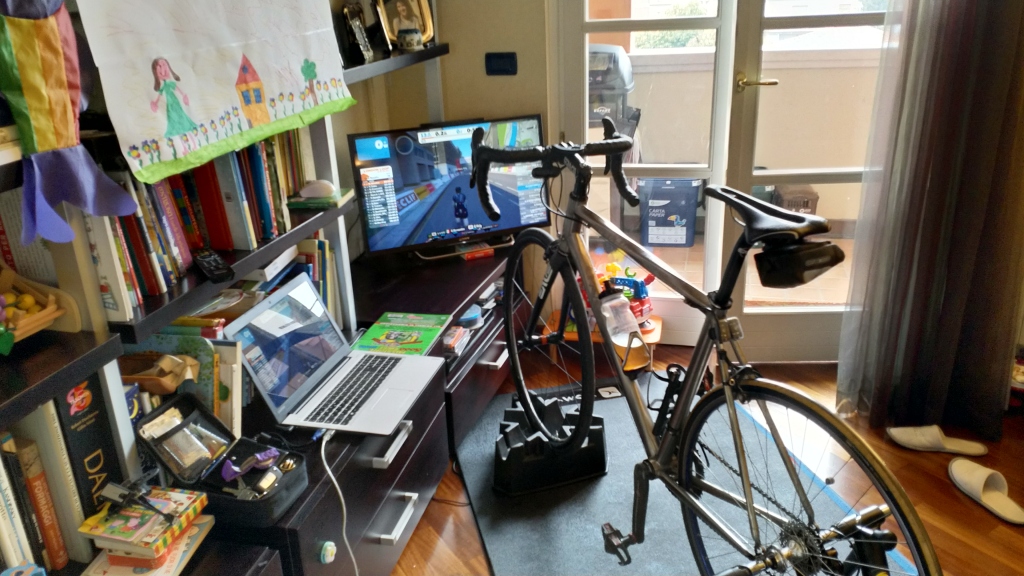 It was Reality or Fiction? My legs say hard reality, my eyes say fiction, my mind is upset. Certainly it was September 15th, when I hook up the pedals and go. Absolutely I have had a intensely workout of 40 minutes, but for all this time I have had the full sensation to go around in London: Zwift … what else!
A big thanks to my friend Rick (grandicimealpine) who translate the report. 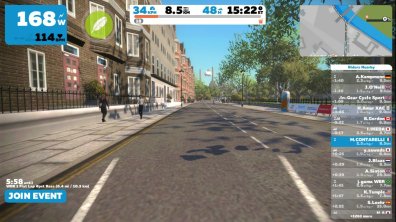 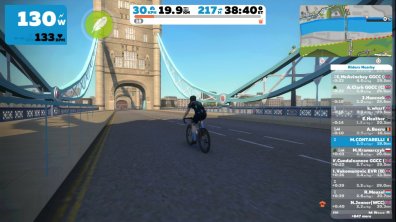 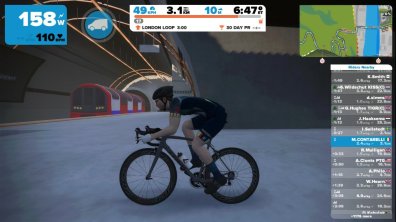 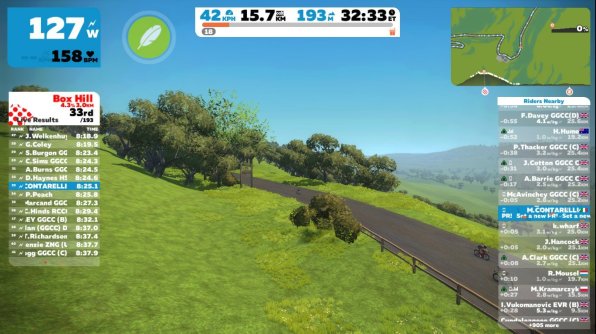 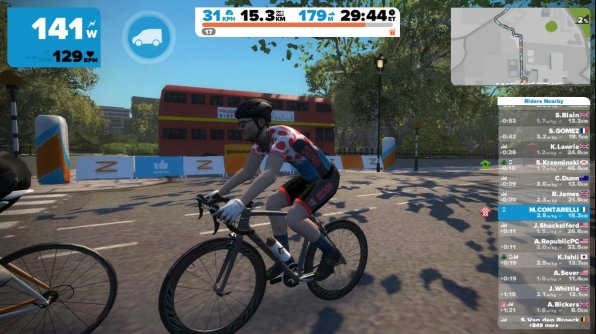 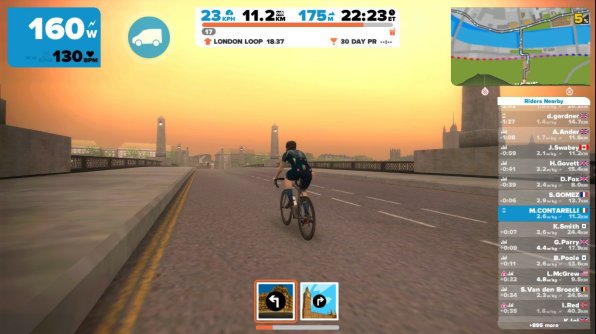 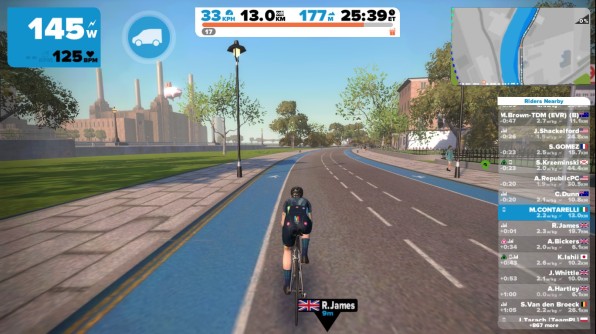 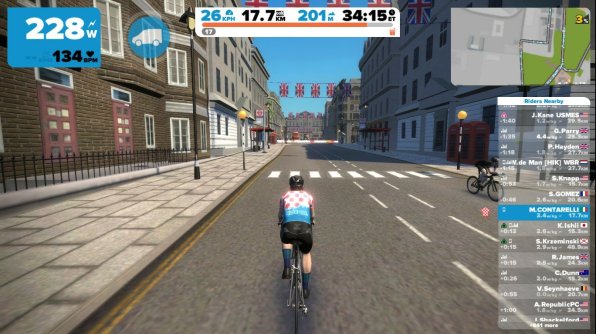 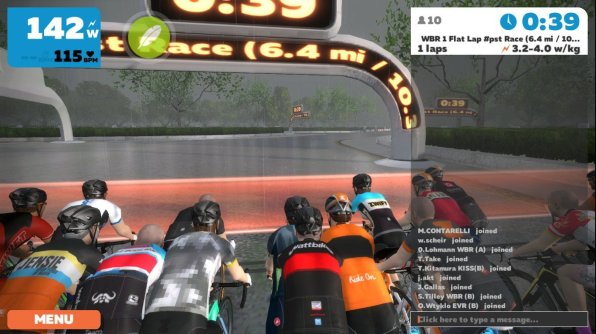 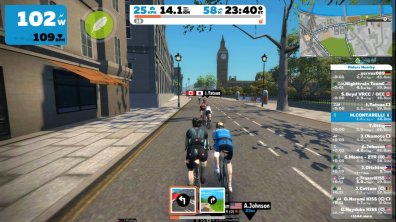 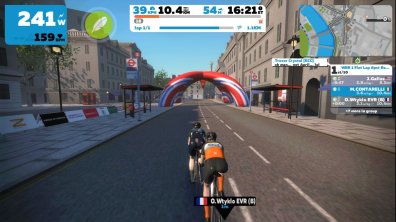