Sunday 2nd July. At 6:05am I’m already in my grid, grid 3 of 4. The square is already full of cyclists also if start is set for 6:30. Year after year I arrive before but I’m ever more behind. This year the weather is not good. Heavy rains cooled the mountains for all week. While I’m going to the village of La Villa, car display 6°C. Amidst the three thousand athletes in the square, temperature rises up to 8°C. We’re all dressed full-winter, I never saw so many pants and jackets.

At 6.30am a bang from a cannon suspended in the sky by an helicopter. Is the start. Michil Costa, the boss of the Marathon, like all the years, anticipates the group on his bicycle. In my grid I have to wait a while before starting to pedal. Finally, at 6:44, I step under the arc and press the start button of my cycle-computer, and my sixteenth MdD starts. Still frozen by half-hour past waiting, I follow the long serpent who moves to Corvara and attack Campolongo climb. The speaker announces that first riders are already at the pass, kissed by a timid sun that is trying to take his space among the clouds. Forecasts say sunny morning and low temperatures. I am still confident and infact towards the end of Campolongo I feel the well-being of some solar radius. On the top I eat an energy gel and down hill to Arabba, ready for another climb. Pass Pordoi waits me, a moderate uphill without prohibitive slopes. After a few kilometers I see another jacket “Cicloturisti!” in front of me. He is my friend Carlo. He had gone in second grid. I reach him to breaking the religious silence of the other marathoners. At this early morning hour, 8°C and uphill, there are very few people who like to chat. Let’s talk a little, he confirm that will choose the short route. He is feel cold. Strange I think, Carlo is not a sensitive to cold usually! I greet him and continue my way. While I climb the sky returns dark, the blue zone in the sky disappear again. At the pass begins drizzling, only a little bit but it rains; I come down with circumspection, both to not slip and for the cold. At the end of descent, immediately began Sella climb. The refreshment is at the first kilometer and is the coldest of the Mdd. I try to gain altitude as soon as possible to get out of the shade of the peaks, in fact some sunshine gives me the feeling of more warm. Unfortunately at the top of Sella climb does not change the situation; 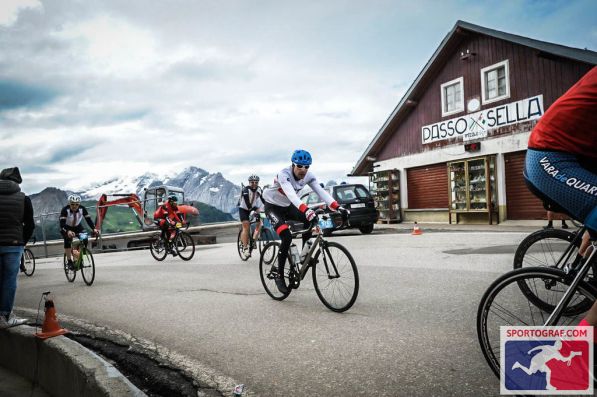 cloudy, Marmolada is all grey and there is frozen wind from the north. Down in the short descent, here and there rain and the tarmac is damp. At 9.15am attack the climb of Gardena pass, the easiest. Shortly I arrived to Pian de Gralba, the place of the most well-stocked refreshment of Mdd, but I do not take a break, and I ride over among the bicycles. I ride through the slight slope downhill at sustained speed, the air is still cold. I get the last two kilometers of the climb and at 9.45 am on the top.I look to the left towards Valparola pass: clouds; I look to the right towards Campolongo and Giau: only clouds. 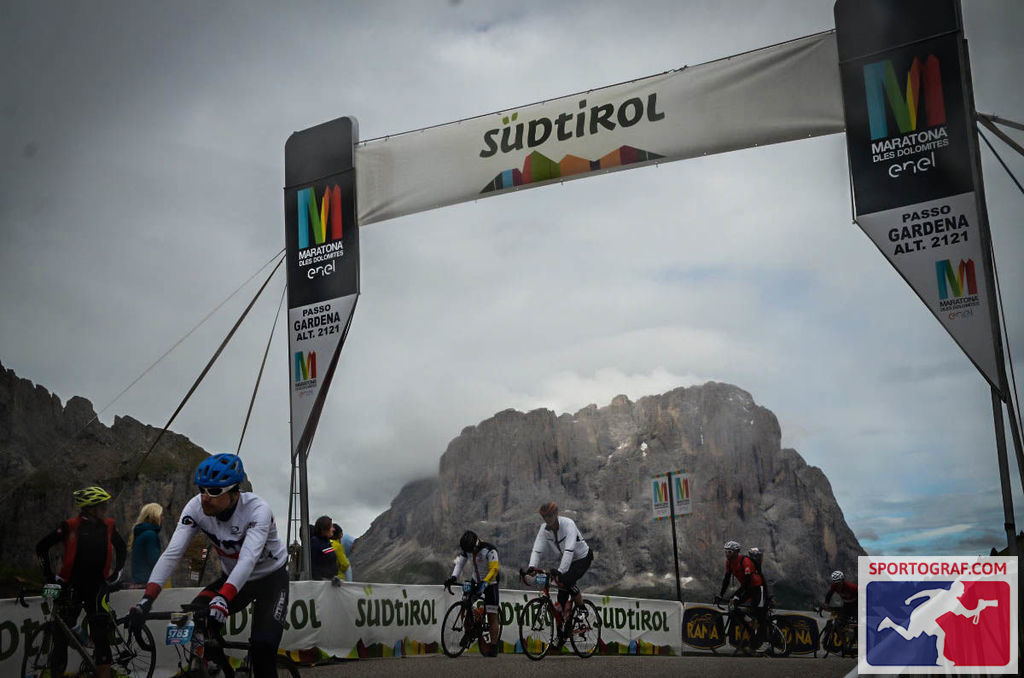 Everywhere the clouds stand around 3,000mt, leaving the peaks of the Dolomites free, but they stop all the sun light that coloring these mountains of a characteristic hue, rose dolomiti. I arrive at Corvara meeting point with my family around 10.00. My decision is already taken, this year I will only get medium route and I will loose the beautiful view of Dolomites of Cortina d’Ampezzo. The frost cools me at every descent, pherhaps I’m not motivated enough and I’m not having fun. Marina, frozen, asks me: “But how do you don’t feel cold?”. I answer: “Truly, is not hot but I’m well dressed and anyway I pick the medium route!”. Actually, my long sleeve MOSSA “Cicloturisti” jackets works fine (see  Inversione termica, skyline e promesse mantenute). Without need to remove any garments and leave these to my wife, I depart with a temperature that never climbed above 10°C! The second climb to Campolongo is always a moment to check out the condition of legs. I try to push a little and they respond well, it comes out my second personal best time. I go back to Arabba, I enter the long slight slope that leads to the crossroads of Cernadoi, are ten kilometers. Sometimes I look up looking for light shots to the Giau pass but the sun never go out. The sun rises again on the green meadows of Falzarego pass and magically the thermometer rises up to 15°C. Unfortunately it is an ephemeral sun, at halfway uphill I’m in the grey of dense clouds, the thermometer goes down to 12°C. Before entering the galleries of Falzarego climb I take two pictures. 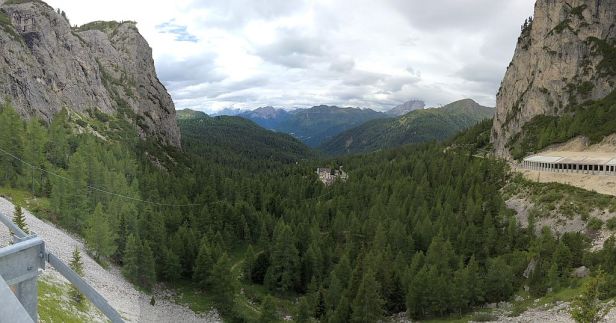 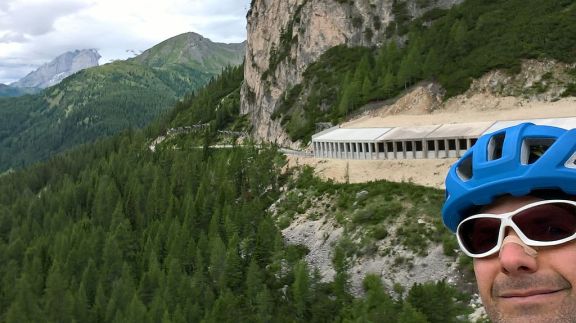 Now the Marmolada glacier is hidden by the clouds. Arriving at top, in front of me Lagazuoi group seems threatening in this dreary sky. Next stretch is the last kilometer of Valparola, the most demanding with slope about 12%. I get up on the pedals and push, also this time I feel no cramp to the adductor of right leg (my Achilles heel). 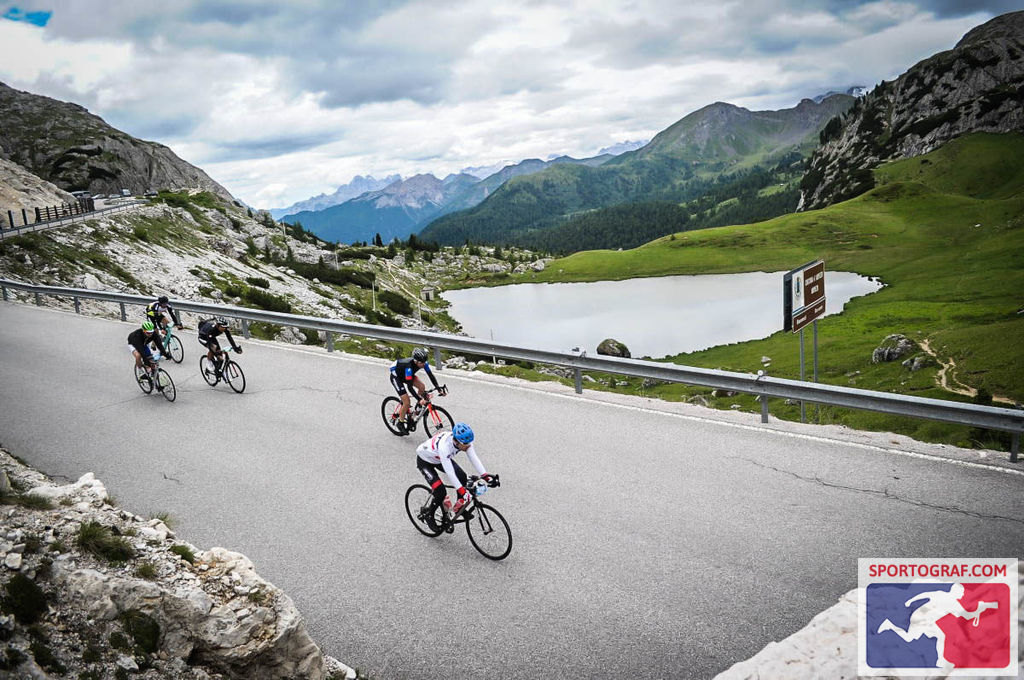 Start to descent, the temperature returns below 10°C, do not take risk and come down quietly, through the village of San Cassiano. I’m again at La Villa and I prepare myself to climb the short but insidious climb named Mür dl giat. I would like to push stronger in this climb but a bit of traffic and some walking cyclists keep me from doing the PB. Never mind. I try to push hard gears into the last four kilometers that separate me from Corvara, but I immediately realize that the cramp is lurking, I get up on the pedals and I proceed in this way. Arriving at the last curve, I see my race time is quite the same as last year, no infamy and no praise. I look for my family. Even this year they found me first!Then I cross the finish line and the miss kindly puts on me the medal of finisher. When I move to the square, everyone is coming: my sister Laura with Marco and little child Riccardo, Manuela and Francesco and then they …my wife and my sons.

The most beautiful kiss comes from those who love you unconditionally and in spite of everything.The most beautiful medal is what you want to deserve every day of the year, from seven in the morning when you wake up, until nine in the evening, when you lullaby them utntil they fall asleep. 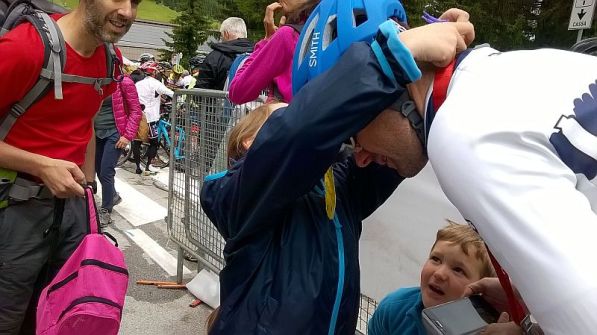 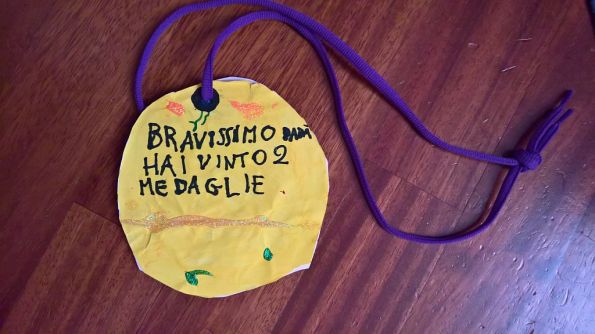 That medal that in the last days have hidden you in all the ways you are trying to achieve it, that medal that represents unconditional love between father and children. Because, this year, the theme of the Maratona dles Dolomites is AMUR! Thanks Mdd even this year, despite the frosty weather, you have been able to warm my heart with great emotions, but above all …

Thanks Marina, Alice and Matteo. 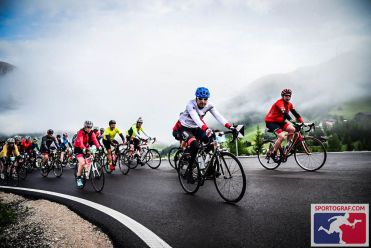 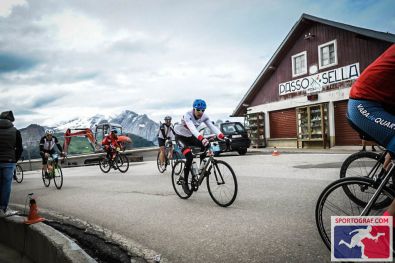 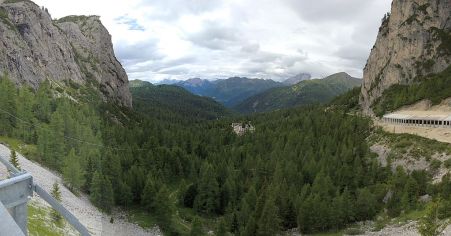 Passo Valparola ‘In tra i sass’ 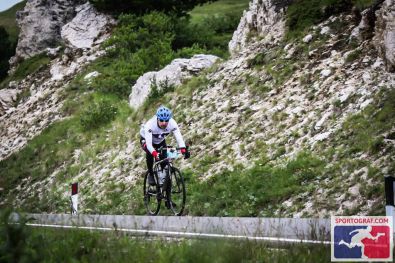 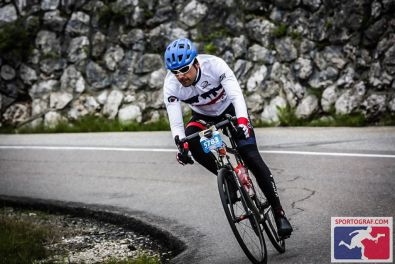 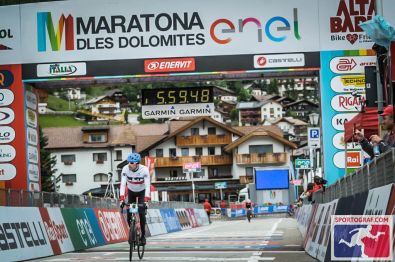 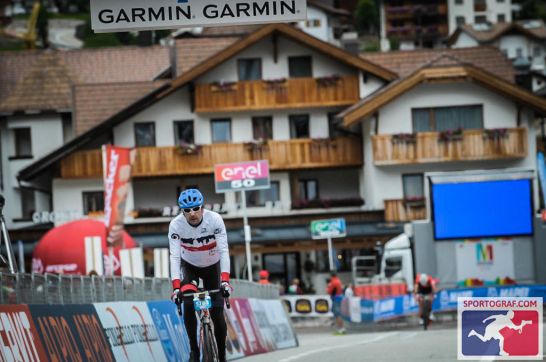 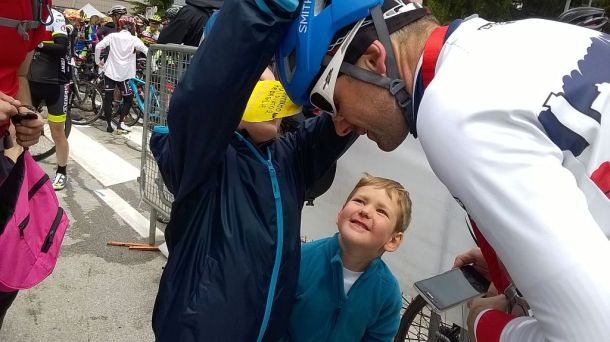 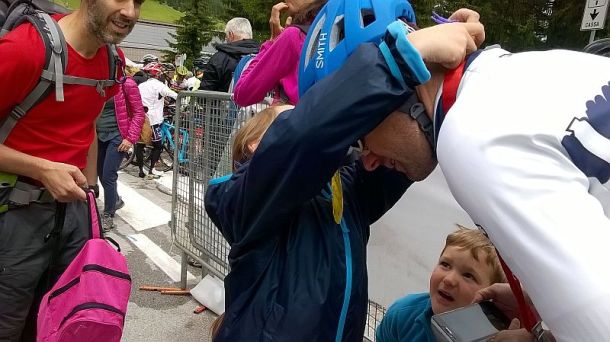 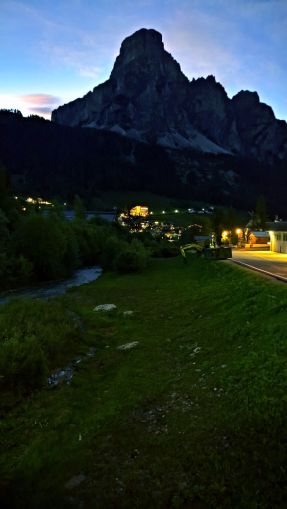